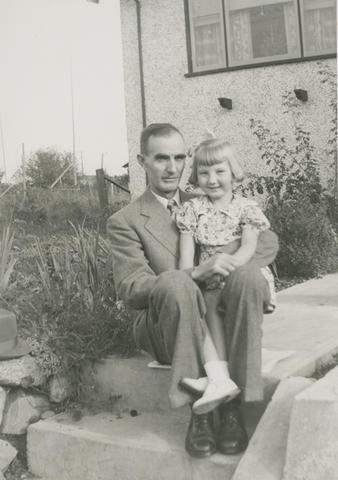 Eileen Archer was born in Saskatoon, Saskatchewan on October 8, 1934 to Arthur and Anna Archer. She grew up at 2957 Orillia Street, where she lived for 72 years (1937-2010) until moving to a care facility. She remained single. In the 1950s, Eileen worked as a clerk/stenographer for E.E. Heath, a Yates Street real estate and insurance firm. In the 1970s and 1980s, she worked as Bishop's secretary and executive administrator at the Catholic Chancery Office. Eileen attended Tillicum Elementary School from 1941-1947; in 2016, framed copies of her photographs were put on display at the school as part of 100th anniversary celebrations. Eileen Archer died on July 8, 2013.

Note on reverse: "Flag-poles in background (at 2973 Orillia). Home of Pass family (Arthur Pass). Mrs. Pass used to fly a flag to 'call' her husband home when he was out in the neighbourhood selling Life Insurance. Apparently, he used to ride a bicycle out and about and could see the flag flying from just about anywhere (there were no tall trees at this time. Yates farm, land was cleared). When someone came to the house looking for him, she could fly a flag and call him home!"