Narrow your results by:

Fonds consists of an album and loose photographs of Reeves / Mayors and Council from the time of incorporation to 1987.

Collection consists of 351 oral history interviews with Saanich officials, employees and residents from 1976-2019. Interviews include: 121 text format (transcripts and summaries) and 230 data files consisting of sound recordings and some video recordings, and photographs. Jo-Anne Morrison, the first archivist at Saanich, began conducting oral history interviews with former elected officials, long-serving Saanich employees, and members of pioneer families in the 1970s. Between June 1976 and April 1977, twenty-nine interviews were recorded. Production of interviews continued through the 1980s, with all interviews being recorded onto audio cassette until 1989 when video cassettes were briefly used. More than 100 interviews were captured between 1976 and 1997. The early analogue cassettes were cleaned, restored, and digitized in 2008. The oral history project was re-initiated in 2006, Saanich’s centennial year, with new interviews being recorded in digital audio and digital video. Digital audio has been used exclusively since 2010. The project is ongoing.

Fonds consists of photographs of public works construction and improvement projects including bridge and overpass construction, and intersections, road views, and buildings. Includes some textual material relating to road improvements, and 4 plans. 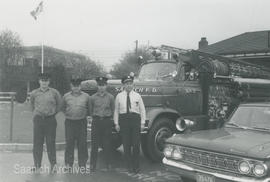 Firefighters and truck [outside Saanich No. 3 Fire Hall on] Shelbourne Street

Collection consists of 1393 photographs, negatives and slides of heritage structures in Saanich. Includes 3.5 m of textual material consisting of files of historical, biographical and architectural information collected on each property. 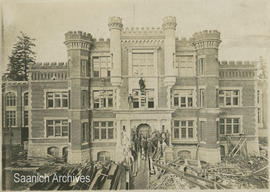 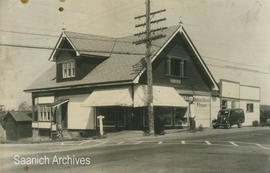