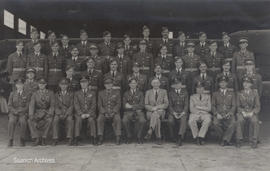 Born in Saanich in 1918, Leslie (Lee) Kellow grew up with eight brothers and sisters in Cordova Bay. His parents, Alfred and Jessie Kellow, owned a small farm in the Sunnymead area. Leslie attended Royal Oak Elementary School, and graduated from Mount Douglas High School in 1936. In 1939, he enlisted with the Royal Air Force and left for training in England. For several years Leslie repaired Lancaster Bombers, then was sent for flight training at the South African Air Force training facility at Kimberley, South Africa. Assigned to the 49th Squadron in Lancashire, England he earned the rank of Pilot Officer. On March 30, 1944, Leslie Kellow died when his plane was shot down during a bombing mission over Nuremberg, Germany.