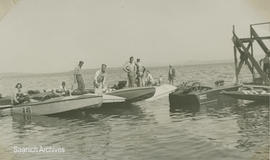 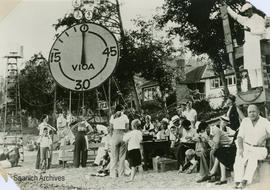 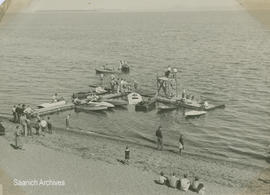 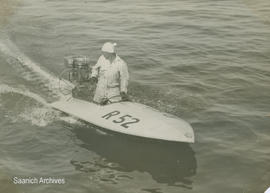 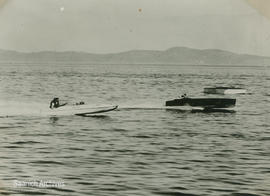 George McMorran Sr. was born in Richmond Ontario in 1855. As a young man he worked at the Stark Mills in Paisley Ontario, where in the early 1880’s he met and married Isabella Stark. In 1890 they crossed Canada with their four children on the recently completed CP railway. At Port Moody they boarded a paddle wheeler bound for Victoria. George McMorran secured employment on R.P.Rithet’s 1000 acre farm as the foreman to clear the land of timber. The McMorrans lived in a farmhouse on Rithet’s land for nine years, and once the job was completed they moved to a 12-acre home on Cedar Hill Road and Pear Street with their six children. The family spent many of their summers on the beach at Cordova Bay. George Stark McMorran, born in Paisley Ontario in 1887, was only two years old when he arrived on Vancouver Island. At the age of 21, in 1909, George went into a partnership to form a real estate company which was known as Dougall & McMorran. Dougall and McMorran began to purchase and then sub-divide land in the area of what is now Doumac Avenue in Cordova Bay. When real estate took a downturn in 1912, the company was dissolved. During WWI George Stark McMorran served as gunner (1914-18). Following the war he opened up a six by twelve foot building called the Canuck Tea Room on rented land in Cordova Bay. Successfully catering to the campers, beach goers and day trippers from Victoria, McMorran was able to expand his store and went into the summer cabin rental business, which reached the peak of 72 cabins. In 1921, McMorran’s Tea Room opened and it became famous for dances held there every Saturday night with local orchestras. In 1923, George Stark McMorran married schoolteacher Ida Richards and the couple had four children: Eric, Bruce, Richard and David. In 1926, George S. McMorran became the first postmaster in Cordova Bay and he was also responsible for bringing in most of the utilities and services to the area. Upon George S. McMorran’s retirement from the business, sons Eric and Bruce took over, updating and expanding McMorran’s, with the addition of the Seaview Plaza Super-Valu store among their ventures. George S. McMorran died in 1971. McMorran’s Beach House was a landmark building along Cordova Bay Road, having remained family owned and operated for over 80 years. McMorran’s Beach House, Lookout Ballroom and Charter’s Restaurant were run by great grandson Wallace McMorran until 2010, when the business was closed. It later reopened as the Beach House Restaurant under new ownership.