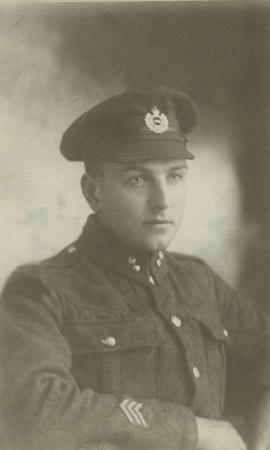 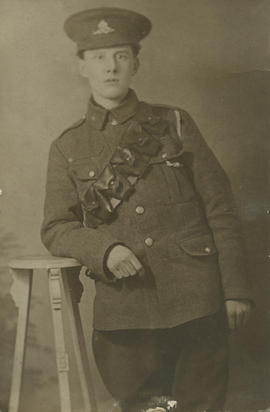 Richard Grenville Rice was born on August 10, 1888 in Derby, England to George Rice and Constance Hardwick. He was already married to wife Gladys E. Evans when he enlisted at age 28 in the Engineer Training Depot of the C.E.F. at Victoria on December 4, 1916. On his Attestation Papers he listed his occupation as draughtsman, living at 2559 Vancouver Street in Victoria. Rice served in France with the 1st Bn. C.E. and was discharged on April 16, 1919. He was a draftsman for the E&N Railway and then for the BC Department of Public Works. He was co-architect (with Karl Spurgin) of the Saanich War Memorial Health Centre (4353 West Saanich Road) built in 1920 and was the artist of the Saanich WWI Honour Roll. After the war, Rice lived with his wife and children Hilda and Richard H. at 1325 Finlayson Street in Victoria until moving to Seattle ca. 1923 in order to pursue architectural work. Richard Grenville Rice died on June 7, 1941 in Seattle.

Donated in 2016 by the granddaughter of R.G. Rice.

No restrictions including exhibit or publication.

Uniform and a selection of artifacts were displayed in an exhibit at Saanich Municipal Hall in January 2017.