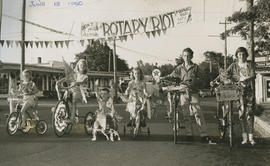 89 cm of textual records and other material.

The Rotary Club of Douglas (Victoria) was established on June 9, 1958. It was the second Rotary Club in Victoria at the time. Oliver Prentice was the first President, serving from 1958-1959. The Club undertook numerous fundraising initiatives to support local groups including the Seven Oaks Treatment Centre and the Sooke Sunshine Camp, both part of the Children's Aid Society of Victoria. Other organizations assisted by the Club included the Canadian Arthritis Society, the St. Joseph Society, the Royal Jubilee Hospital, the Queen Alexandra Solarium, and Meals on Wheels. The Club also sponsored the Cadboro Bay Little League and various scholarships. Fundraising projects and events included fishing derbies, food sales, auctions. In the 1960s, Club members worshipped together once a year at St. Luke's Anglican Church on Cedar Hill Cross Road, and every year the Club held a ball at the Crystal Gardens. In 1961, several Club members attended the 52nd annual convention of Rotary International in Tokyo, Japan. In 1966, Club President George Steele presented a cheque for $10,000 to the G.R. Pearkes Clinic for Handicapped Children. The name of the Club changed to the Rotary Club of Saanich (Saanich Rotary Club) in 1973. The Rotary Club of Saanich is still active (2015); members continue to meet weekly and participate in fundraising and community service projects.

Donated in multiple accessions in 2015 by several members of the Saanich Rotary Club.

Records are predominantly arranged by year and grouped by material designation within each year.